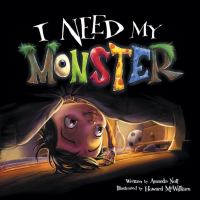 I Need My Monster

A must-have for any boy (or girl) who needs to appreciate their monster under the bed.

A new bedtime favourite around my house.

A scary monster lived under Ethan’s bed. Ethan knew this because he checked for him every night.
One night when Ethan peered under his bed, his monster wasn’t there! Instead, there was a note: “Gone fishing. Back in a week. Gabe”
Gone fishing? Ethan couldn’t believe it. How would he get to sleep every night without hearing Gabe’s dreadful groans, scratching and other creepy noises?
Ethan thought for a moment. Then he knocked on the floorboards and quickly scrambled into bed. Sure enough, in less than a minute, there was a new monster in his room.
However, the new monster’s teeth weren’t sharp and long enough. Ethan knocked on the floor again.
Now there was another new monster… but Ethan could see right away that his slobbering wasn’t messy enough. He knocked on the floorboards again.
The next monster didn’t have a scary tale. The next monster wasn’t big enough, and the next monster … Well, there was something wrong with each new monster. None of them were scary enough for Ethan. What was he going to do?
It turned out that Ethan didn’t need to do anything at all. Gabe returned early from an unsuccessful fishing trip - having discovered that fish are simply too scared by under-the-bed monsters!
This clever picture book, with its wonderful illustrations, will quickly become a bedtime favourite.

I tried to sleep, but it wasn't the same without Gabe [the boy's monster under the bed]. I missed his ragged breathing. His nose-whistling. The scrabbling of his uncut claws. How would I ever get to sleep without Gabe's familiar scary noises and spooky green ooze?

There are no notices for this title yet.

Find it at Library